On 8 September 2015, Scene / Asia’s Kick-Off Event was held at a lecture room in the Asian Cultural Exchange Agency: one of the five institutions that make up the brand new Asian Cultural Complex (ACC) in Gwangju, South Korea. Eleven members of Scene / Asia’s curatorial team from five Asian countries participated in the event (Jason Wee joined via Skype). All members elaborated on their own objectives for taking part in a multi-national project such as Scene / Asia, while the Japanese members, including the Chief Director Kyoko Iwaki, introduced the upcoming projects and plans for the future. 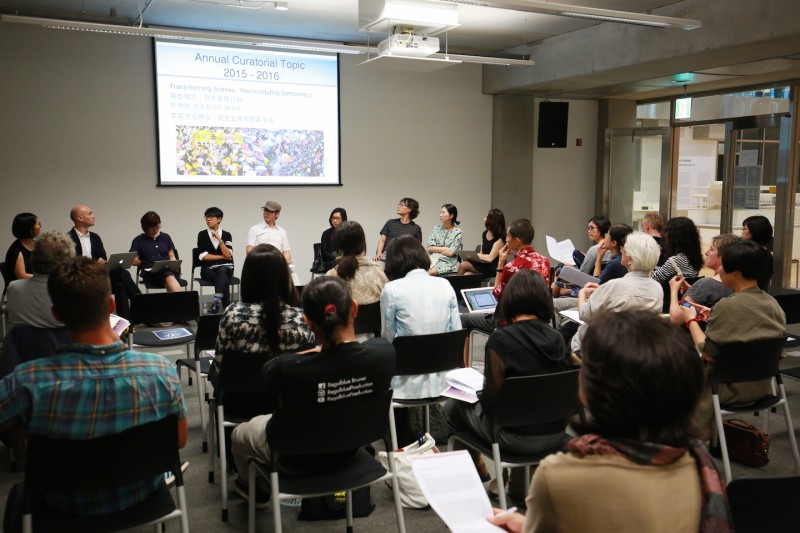 Since Scene / Asia is not a project that fits into an existing format—such as inviting overseas productions, launching co-productions, organizing residencies and cultivating young talent—it might have been difficult for the audience to grasp the entire project in only two hours. However, the fact that the Q&A session at the end planned for 15 minutes ran on for 45 minutes, suggested that certain producers, artists, administrators and researchers were genuinely interested in the future development of this project. The people who participated most proactively in the discussion were those professionals from Southeast Asian regions, such as Indonesia, Malaysia and the Philippines. It is easy to see that these young people responded well to new ideas and actions, and yet were also likely to be considered as sort of outsiders in their respective regions. Their desire to connect with other Asian colleagues who think in the same way was evidently present.

Since the meeting of IETM (Informal European Theatre Meeting) was organized on the same day as the launch event, many theatre professionals attended not only from Japan and Korea, but also from other Asian regions and Europe. However, for most of European theatre professionals, the Scene / Asia project possible fell outside their primary area of interest. To develop a space for active spectatorship in Asia—by referencing both the diachronic historical axis and the synchronic contemporary axis—might be interesting to a certain extent for Western professionals, but not imperative. It might not mean a thing to them if, for instance, a superlative Asian performance artist is not properly recognized and framed in the Asian academic context. Alternatively, they could analyze and contextualize the artist in their own way: that is, by adapting the yardstick of the Western theatre canon to gauge the artist that came from an oriental, exotic, and peripheral region.

More still, it could be said that “developing active spectatorship,” which is one of the major missions of Scene / Asia, might sound a bit too stale for them. “Why again?” might be their spontaneous response. However, in Asia, this kind of critical spectatorship has not, if never, taken root. An Asian theatre canon that could form criteria for both referencing and criticizing was never shared in this region. For this reason, it was perfectly understandable that people who responded most strongly to Scene / Asia’s mission to “develop a sustainable critical canon from Asia” were not Western, but rather Eastern—and especially Southeast Asian—theatre professionals. It was simply gratifying to know that many Asian theatre contemporaries sympathized with the innovative rationale of Scene / Asia.

During the event, three main things were introduced to the audience: the meaning behind the naming of Scene / Asia; the design concept behind the logo; and the project plan for the initial year. Noted below are brief explanations of these three topics.

Scene / Asia will be assessing two “scenes:” both the performance scenes and the sociocultural sites that cultivate those performances in Asia. When approaching the artworks of neighboring Asian countries, what often becomes the primary obstacle is the fact that many people only have knowledge about the other Asian countries via either purely domestic or Western media. For this reason, Scene / Asia attempts to delineate the portraits of respective Asian regions through firsthand experience, observation and research. After gaining this firsthand knowledge, Scene / Asia attempts to develop a deeper understanding of the artworks. To this end, on the Scene / Asia website as well as in our annual symposiums, the social scenes and the performance scenes are presented to audiences with equal weight.

Naoki Sato of ASYL Design is the creative mastermind behind the visual branding of Scene / Asia. The design process was initiated by, firstly, responding to the Scene / Asia team’s requests: to visualize the concept of “different polyphonic voices coming together to form a loose form.” Immediately afterwards, Sato came up with an image of “a planet that is not yet solidly formed.” And this initial image reminded the team of Asian villages that sporadically expand without any central point—in direct contract with Western urban planning in which the city is centralized and expands from the central reference point in a circular format. Additionally, in order to visualize the fact that the collective formed from multiple voices is not a fixed state but rather dynamic, Sato employed motion graphics so that the logo constantly shifts and changes. After weeks of trial and error, a logo was created consisting of multiple small ovals that subtly change places yet maintains collective synergy.