Since 2000, Natsuko Odate has managed many leading Japanese artists, including Nobuyoshi Araki, Yasumasa Morimura, Emiko Kasahara, and Miwa Yanagi. She has also served as an editor of online magazine ART iT since 2010. »more

The debate about what the arts contribute to society may well have picked up pace in the UK in the second half of the 1990s under the New Labour government with the aim of securing more public funding, but in Japan it was the Fukushima nuclear disaster, which was sparked by the Great East Japan Earthquake in 2011, that proved a major opportunity to share this inquiry. While in the former case, the debate gave a boost to socially engaged art dealing with concrete issues in society, for the latter an urgent feeling of helplessness propelled not only artists but many people working in the arts to examine social problems more than ever before.

In fact, Japan was already engulfed by a wide range of social problems, including depopulation in rural regions, an aging population combined with a declining birth rate, the economic crisis, energy problems, and irregular employment. But the exposure to such an immense disaster led to works of art that both introspectively attempted to locate these social problems and examine our society as well as works of art that interpreted social problems and re-examined them historically, in addition to endeavors to uncover social connections in the art of the past.

On the other hand, we have also seen the relaxation of the ban against arms exports under Yoshihiko Noda’s Democratic Party of Japan government and the nationalization of the disputed Senkaku Islands (Diaoyutai Islands), as well as, especially after Shinzo Abe returned to power, a shift further to the right in regards to foreign and security policy, resulting in a conspicuous rise in nationalism. Conservatives have been the constant critics of postwar democracy in Japan, and the revival of things such as the family and sense of community that they say have been lost due to postwar democracy is clearly stated in the widely available Draft Constitution of the ruling Liberal Democratic Party of Japan. Based on the principles of neoliberalism, the somewhat patriarchal reconfiguration of communities has been quietly advancing, whereby governing bodies close to financial collapse give a certain amount of money to local associations and have them provide government services.

The three works of art I have selected are formed out of various types of cooperation, so to speak, premised on the notion that conflict arises within this continuing kind of exclusive situation. However, such cooperation does not create so-called patriarchal communities, nor is its aim even to form a consensus. On the contrary, these works of art are made as ways for positions to be exchanged, as the practice of “dissensus” in the manner proposed by Jacque Rancière. This may be criticized as idealistic or simply unrealistic. And yet, can we not view this scooping up of the voices of the voiceless, of the disallowed voices, as one form of democratic practice in the true sense of the ideal? We can see this as the role of the arts, not simply as a reproduction that reflects reality just as it is.

Kyun-Chome is a male and female Japanese art duo that started working together in 2011. In 2015, during a residency in Germany, the group produced New Faces with Syrian refugees, featuring footage of blindfolded people making a face in the style of the “lucky face” (fukuwarai) game. New Faces Made Here expanded this concept into a performance. During a solo exhibition, the group invited refugees in Japan to stay at the venue, where they took the lead in making “new faces” with members of the audience over the course of three minutes. All the superficial acts of the audience dictated by their conscience slid away, leaving only the discomfort felt when communication did not go smoothly and the torment of their own hypocrisy. This was an attempt to perform tasks cooperatively through the slight, faltering exchange of fingertips with refugees, who must live their lives by putting on a new face in spite of Japan’s refusal to accept them. 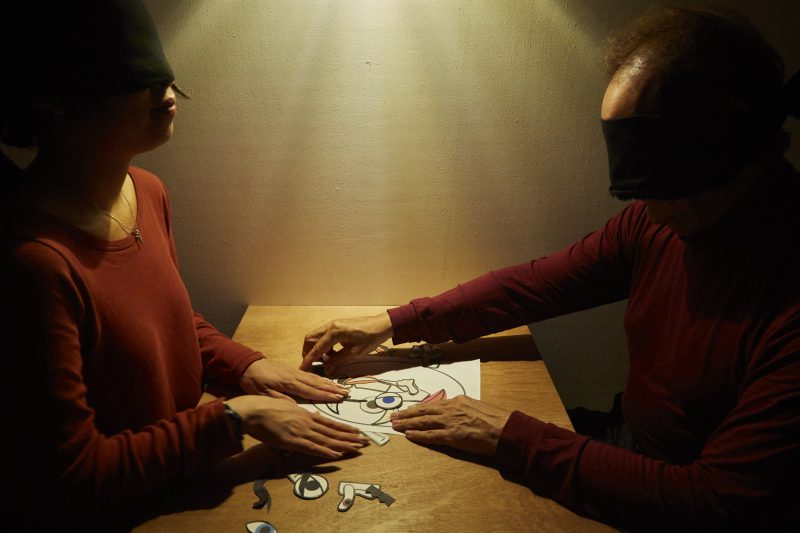 This video can be regarded as the first of Koki Tanaka’s recent and wide-ranging endeavors to test what is and is not possible through collaborative actions. After this film, he made a series of other “attempts,” such as pottery, cutting hair, poetry, and exhibited their video documentation as a work of art. This work is utterly underpinned by the active approaches of the students who appear in it as well as their strength of will to complete the challenge. Whether it’s their own individual confidence in their performance technique or something to do with their American personalities, they debate each other without any inhibitions and proceed through proactive negotiation and compromise, a process that all seems to form an ideal manifestation of democracy. In the moment in the video where the artist himself can briefly be seen in the background, we sense how everything is being left to the autonomy of the performers in this artwork filled with the hope offered by the act of cooperation. 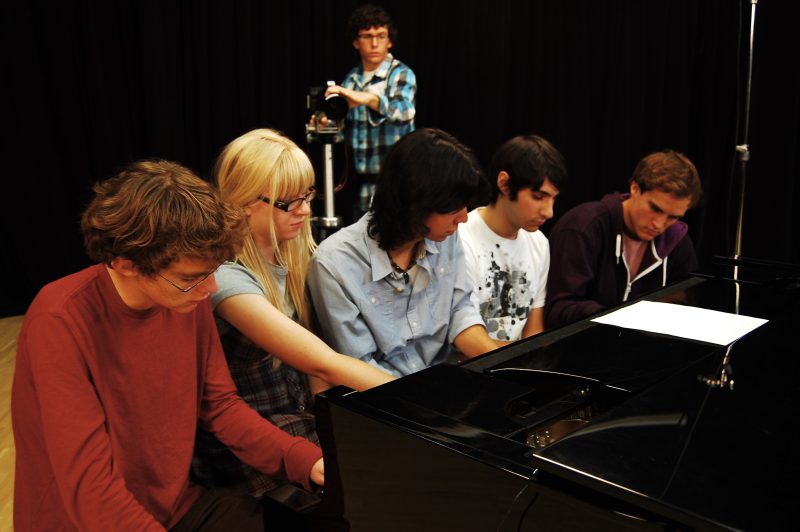 This video work comprises archive footage of the education system in Japan put together by the US Army, intercut with footage of a workshop the artist did in South Korea. The artist’s seemingly gentle but actually autocratic instructions overlap, in the form of a metaphor for the relationship between America, Japan and Korea, with the objective yet one-sided commentary of the narration in the archive footage and shots of the disciplined Japanese students. In the latter half, the Korean college students watch footage of warfare (not shown to the viewer) and are then instructed to re-enact it. Gradually becoming more and more excited, they take the actions they create beyond what they are told to do by Fujii. In the independence of their behavior we can glimpse the budding seeds of democracy, though an ambivalent interpretation is also encouraged whereby it is possible to see this as the seeds of totalitarianism, which rouses a sense of unity in everyone. 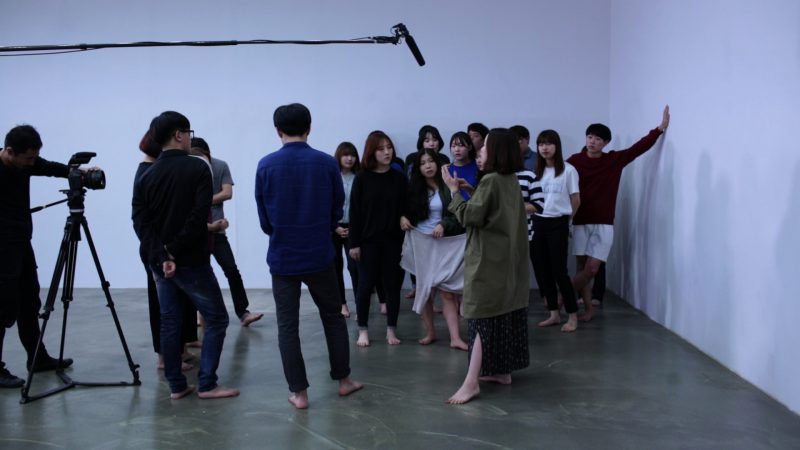