HOME | Curation | Korea | What Is Theatre?: A Question for a Democracy of Senses
Curation: Korea
Tweet

Artist and theorist working on cinema, video art, performance, theatre, and interdisciplinary arts. His performance projects often aim to invite audience members to reinvent their own memories as well as senses. »more

A notable number of internationally significant works in the 2000s seriously unsettled and questioned the fundamental conditions of theatrical representation, renewing what once fueled the ardor of modernism: self-reflexivity. Most compellingly pronounced in work of Jérŏme Bel, William Forsythe, and Rimini Protokoll, among many others, a set of questions concerning the on-stage presence of the body and the spectator’s perception of choreographed or dramatized presentations proposed different means of conceiving theatrical communication. After all, as Hans-Thies Lehmann has suggested, the modernist interrogation that had invigorated visual arts in the 1950s and onward had until the 1990s hardly been explored on stage with full efficacy and vitality.

More than reinventions of style or form, these influential works reworked the very apparatuses of audience, spectatorship, and the senses, all involving the architecture of the auditorium. Far from the reductive concentration on a single material, which characterized the practices in fine arts at the height of high modernism, the on-stage examination of the “medium” of theatre now involved multiple layers and aspects of theatrical practices, material or immaterial, architectural or sensory, immediate or discursive.

Unlike painting or sculpture, theatre is not a “medium” of which the defining elements are reduced to a singular material; the question of theatre is bound to involve not only the formal elements like scripts, actors, or mise-en-scène, but also the material and immaterial conditions that constitute the theatrical experience, namely the varying components of the theatrical space.

To say the least, reinventing the apparatus of looking entails the reformation of senses. As the etymology of “theatre” infers, going back to the Greek word “théâ” (to see, to watch), thinking and “seeing” are indeed interrelated. Theatre is a total practice of structuring, restructuring, and reconsidering the contexts in which we construct our perspectives upon the world.

It is in this sense that the questions concerning the apparatus of theatre can be and should be framed within larger contexts. After all, theatre as “the real gathering” of real people in a real site, in Lehmann’s definition, is an inevitably “social” phenomenon embroiling urgent problems in political contexts, more vibrantly and directly than do any other art forms, namely the questions of community and democracy. The modernist question of the medium inexorably brings out the questions of community when it is thrown upon the stage.

Dealing with or questioning the current political conditions within conventional theatrical settings can hardly bring fundamental changes to the dominant regime of senses, as it readily conforms to pre-existing conditions of homogenizing spectatorship. What is critical for raising and vitalizing the questions of community and democracy is to unsettle and reconsider the conditions of a genuine gathering.

What constitutes theatrical experiences? When does a certain sensory engagement become “theatre” and in what sense? What alternate forms of “community” can be conceived and actualized through “theatrical” practices? What are the defining conditions of “theatre” and what does it mean to question, unsettle, or redefine them in the context of late capitalism?

It is precisely this set of questions that inform some of the stage practices in the 2010s in Korea, or vice versa. A number of Korean artists reconfigured the very physical conditions of theatrical spectatorship, calling for alternate relations among the audience, stage, and the performers. Resetting the conditions for “théâ,” the totality of senses, they reconfigured the theatrical apparatus in order to create unconventional modes of artistic experiences. What is important is, of course, the political domain in the act of reforming the senses.

The works I introduce here do not necessarily take the form of “political art.” Far from the norm of un-politicized presentations of political ideas, they question the very condition of the senses; they are more deeply political in that they politicize what is not considered political.

Theatrical efficacy comes not from settling for another dogmatism but from unsettling and questioning what constitutes our senses. Theatre can be a genuine democratic apparatus not as a domineering apparatus, however “alternate,” that (re)determines the senses, but as a critical mechanism that proposes the very necessity to reinvent the senses. 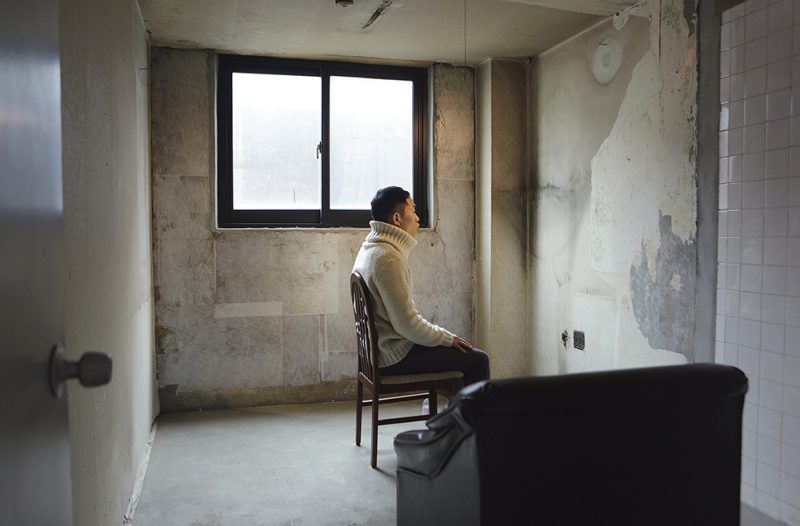 Park Minhee has been trained in the tradition of vocal music widely referred to as gagok, and it is from this very grounding that her stage practice stems as well as interrogates.

In No Longer Gagok: Room5↻, Park invites each of the spectators as an individual listener, rather than as a part of a collective audience confined to the auditorium. Each visitor travels through five rooms as well as two isolated areas within a building, staying at each site for exactly four minutes, during which a song, a lyrical poem, or a set of gestures is presented in extremely close proximity for private engagement. Each of the seven spots corresponds to a part in the overall composition of the genre she performs.

This privatization of the musical performance, the physical reconstruction of the singer-listener relationship, derives from Park’s reflection upon the very act of singing. To the highly refined gagok singer, singing is in essence a private and bodily act of enjoyment to begin with, for the performer as well as for the listener, and it can only be fully appreciated by both parties as such. “Musical” experiences, after all, involve more than the ears; being formed through air vibration, the act of singing is bound to be synesthetic, if not entirely tactile. The “normative” auditorium reinforced in commercial presentations not only fails to convey what she values in musical performances but also consolidates the very act to the preset relations of gaze and power. Park’s innovation is indeed an architectural reworking of space as well as the senses; the artistic reformation takes place in “place.” Detached from the overriding power of group reactions, each listener has to reset the conditions of listening and reinvent herself/himself as a singular, discrete “individual,” not an assimilated part of a cohesive, homogenized crowd. The very basis of theatre is in the highly individuated, intimate experience. The possibility of the formation of an alternate community, if at all, is grounded upon individual differences, or “dissensus,” in Rancière’s term. However fleeting and un-documentable, the community of dissensus operates through the reinvention of the senses. 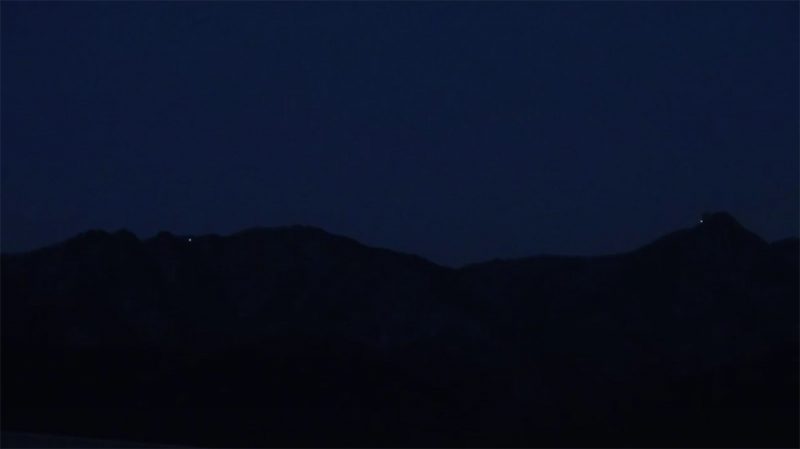 The audience is invited to the lawn in front of the National Museum of Art in Gwacheon, from which Mt. Chunggye can be seen in the distance. As the day darkens, two barely perceptible lights in different locations within the contour of the mountain start to move slowly towards each other. The lights come from unidentified hikers, about whom we learn almost nothing; their hard physical labor intended to make their paths visible is obliterated by the simplicity of tiny light dots. What constitutes the “theatrical” experience is the long time during which the two miniscule lights come closer and move farther apart again as they cross each other’s path.

Tele-Walk unsettles and reconstitutes the physical conditions of the theatrical engagement by reworking the scales and the spatial contexts of seeing; it inspires a starkly new relationship between the act of seeing and the stage, as the quiet spectacle takes place in the farthest distance as a sort of “appropriated landscape.” A brute, literal reinvention of the Brechtian distancing, the remote spectatorship reformulates the ways our senses operate for theatrical experiences and offers alternate means of interacting with our own senses and expectations as well as with space.

Seeing operates within the apparatus of space, as does “theatre.” What “takes place” in Kim’s work is the precise the “place” itself, a political ground for resetting the very conditions, physical as well as conceptual, of theatre. 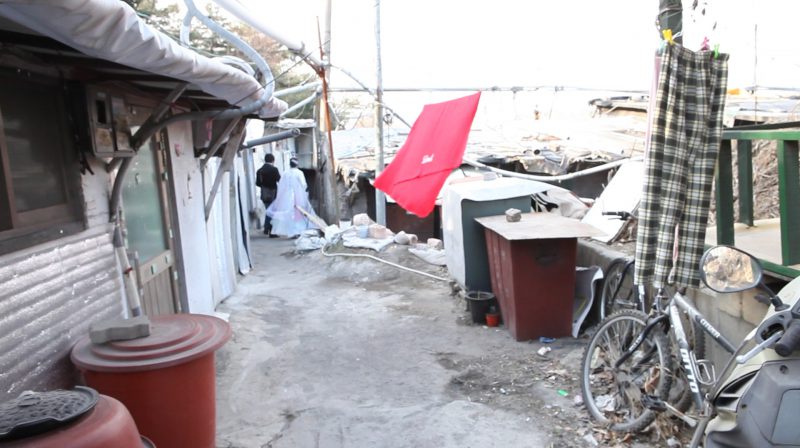 The starting point of this multi-layered event is a simple act. Dancer and choreographer Kim Yoon-Jin performs the fairy dance for each of the four private spectators inside a small shack in Guryong, an “underdeveloped” area in the midst of the well-to-do neighborhood of Gangnam. The dance is a reconstructed performance deriving from a myth from the region. An initially site-specific performance becomes a ground for a much larger event.

For the general audience of hundreds of spectators, Guryong Fantasy—Resurrection of Myth is a symposium-like event, during which each of the four witnesses of the dance delivers his own account in separate rooms. The audience can only choose and listen to one presentation among the four. Each account has its own style and mode of speech, conveying highly personal reception and interpretation. The discrete presentations amount to nothing but an isolated array of subjective testimonies, a kind of Rashomon effect. The general audience is not only disallowed the immediacy of the dance performance but also confined to a fraction of the entire symposium. No one, not even Kim herself, has access to the entirety of the “work.” The dance is itself an elusive illusion, as is the fairy. By dismantling the homogenous mechanism of looking that the normative auditorium operates through, Kim questions the very “myth” of power that governs traditional female dance. “Fantastical” indeed, Guryong Fantasy is not a presentation of fantastical events but an event that ironically questions the mechanism of fantasy.

Discursive processes replace the bodily experience of the dance. Or, can they really be separated as entirely different realms? What are the conditions of “dance” and what are not? Where do the agencies of exclusion and mystification of the body come from, in dance as well as in myth?