William is a writer and translator based in Tokyo. Born in the UK, he graduated from King’s College London with a degree in English literature and has lived in Japan since 2004. His book Dissenting Japan: A History of Japanese Radicalism and Counterculture, from 1945 to Fukushima was published in 2016. »more

If Francis Fukuyama and his ilk were to be believed, the era of -isms was supposed to be over and we would all be living in a paradise of liberal democracy. Things, as we now know, didn’t quite turn out that way. Like a zombie hydra, the -ism is back with a vengeance.

Faced with all these variant extremes clashing together violently on the screens of our televisions and mobile devices, what can ordinary citizens do? I would like to suggest we take some hope in the renewed interest in the commons that we are seeing around the globe.

The commons refers to the shared resources accessible to each and every member of society, whether that be digital resources like the Internet, cultural and intellectual assets like books and libraries, or natural resources such as water, air and land.

The Occupy movement sprung up around the world in September 2011 in protest at the way the finance industry and banks had been bailed out with taxpayers’ money, despite having destroyed the global economy, and allowed to continue their rule over “the 99%”. They spoke to the new anger of the Millennials, who were waking up to the realisation that they would never experience anything like the future comforts that their parents’ generation enjoyed.

Occupy started in New York, but the people who took over Zuccotti Park were far from the first of their breed. A short glance at history will reveal countless earlier examples. In fact, according to thinkers like David Harvey and Henri Lefebvre, the most vital and effective use of the commons can be found in cities – and these can become revolutionary movements.

Why is the commons in Tokyo so elusive? One tempting answer perhaps lies in what Donald Richie called the “nourishing void” at the heart of Japanese culture. The traditional arts favour, in Richie’s words, “emptiness”, always saying less not more, and always wanting and searching for nourishment. But in terms of urban anthropology, this can be superficially frustrating. After all, the centre of Tokyo is permanently occupied by emptiness, as Roland Barthes observed: the almost entirely closed Imperial Palace grounds consume the nucleus of the city. So where do all the people go? And how is this compatible with the concept of the commons?

Space is rigidly controlled in the clustered centres of Tokyo, from the “pedestrian paradise” zones in Ginza and Shinjuku, where signs mandate that performing and vending are prohibited, to the area around the parliament building, where police block off the main road with trucks and barriers to force demonstrators onto narrow streets covered by trees.

Ironically, “private space” has emerged as more dynamic and welcoming to the public: visit the developments in Ebisu, Marunouchi, Roppongi and Shinagawa, all planned by corporations. But the private sector is also leading the charge towards the constant cycle gentrification that is turning Tokyo into a series of identical, anonymous districts, as witnessed in the recent changes to Roppongi, Shinjuku and east Tokyo.

But not everyone is satisfied with this situation, as we can see from the intermittent surges in protest movements in Tokyo’s public spaces, not least the Anpo protests in 1960, the street riots of 1968 and 1969, the Shinjuku “folk guerrillas” of 1969, the anti-war protests in 2003, and the weekly anti-nuclear power vigils outside the prime minister’s residence since 2012.

This is at its best when creativity is allowed to intersect with spatial practice. There are too many case studies for the remit of this short text, but I would highlight one that has become somewhat emblematic of Heisei-era (post-1989) social movements. Conceived by irregular workers from Japan’s growing precariat class, the “sound demo” emerged as a formidable model of protest that involved music and dancing. The phrase was coined in the early 2000s but its roots can be traced back further. The use of trucks and floats combined with music (live musicians, DJs, speakers) and the careful exploitation of an “audience” of bystanders in commercial areas of Tokyo has defined many of the most memorable demonstrations against the Iraq War and President Bush’s visit to Japan in 2003, the privatisation of Miyashita Park in 2008, the first mass anti-nuclear power protests in 2011, and SEALDs in 2015.

For my curation, I have chosen three socially engaged art projects, or artistically engaged social movements.

Occupy Tokyo fizzled out as soon as it started, but the anti-nuclear power protests that started in 2011 and peaked the following year in response to the Fukushima crisis provided a proxy sit-in movement that lasted even longer.

A group of veteran activists erected a tent outside the Ministry of Economy, Trade and Industry (METI) on September 11th, 2011, and began to occupy the corner of land in Kasumigaseki, in the heart of the government district of Japan’s capital. There they stayed until August 21st, 2016, when METI’s legal campaign to have the protestors evicted finally won out and the tents were removed.

By then, there was no longer just a single tent. On December 5th, 2015, a second tent was erected and this time it was an art space. The Anti-Nuclear Tent Museum, as it became known, featured artworks by the likes of 281_Anti Nuke (http://www.281antinuke.com/) and Yoshitomo Nara, whose images had become iconic for the entire protest movement.

In the same way as police unceremoniously loaded away all the books from Occupy Wall Street’s free library, this open art space in one of the least “artistic” areas of Tokyo is no more. But the spirit lives on. Organisers saved the exhibits and even the artworks that were directly painted onto the tent. They are available for rent to anyone who wants to create their own version of the Anti-Nuclear Tent Museum somewhere else. 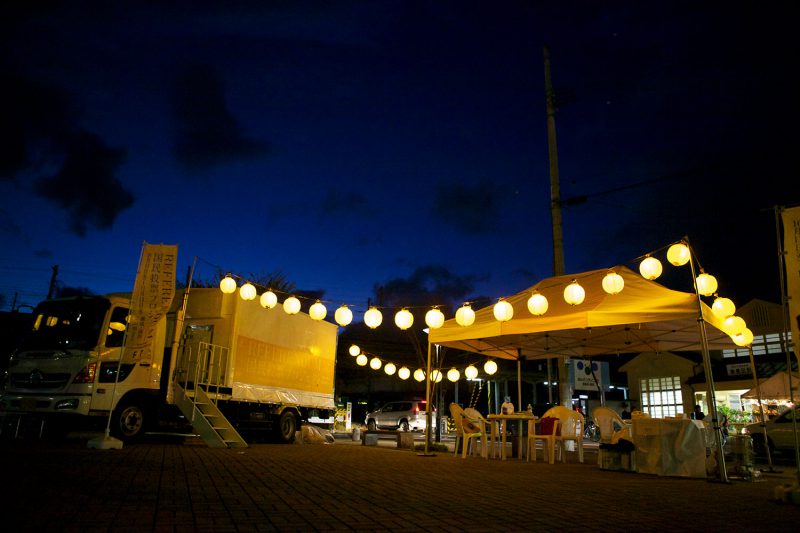 Takayama and his collaborators set out to engage audiences in Fukushima and Tokyo by building an archive of man-on-the-street-style video interviews with school students asked the same stock questions. These were then available to watch in a series of small booths inside a van, which travelled between different sites in Fukushima and Tokyo before and during the performing arts event Festival/Tokyo. Audiences were free to climb inside, watch the interviews, and fill out a sheet of paper answering the same questions themselves. They then “voted” with this paper by placing it in a ballot box inside the van.

In addition, forums and talks were held as satellite events at the various stops on the tour. It became a mobile agora, a vital platform for discourse and engagement in a nation where voter apathy had become entrenched, while also neatly eschewing the conventionally abrasive and didactic style of political theatre.

The project continues, travelling like a caravan to various new locations around Japan, and conducting new interviews to add to the archive.

Flash mobs have been mostly relegated to the level of gimmick in Japan, the preserve of TV commercials and weddings. Mass pillow fights notwithstanding, everyone knows that an event when several people engage spontaneously in the same action in public can have a political message. In fact, the flash mob is a trendy label today but the sit-in, die-in and so on are clearly its predecessors.

A small anti-war group called Mannequin Flash Mob Kanagawa organised a mob in the city of Ebina, a short distance from Yokohama. Participants dressed in similar clothes and took turns to walk around the pedestrian walkways holding placards. They would stop to strike a pose for a short time, before dispersing and repeating the process.

It was simple yet effective: an act of jamming the everyday, ordered serenity of quiet suburbia. Perhaps it was the closest time that patch of Kanagawa has ever got to hosting a Situationist prank.

That being said, the Ebina flash mob passed without making ripples, until, that is, the mayor decided to take affront. The local government responded with flatfooted aplomb by banning all flash mobs from public spaces in the city.

Not to be discouraged, more flash mobs have been organised in other locations and the protestors are suing to ensure their right to free assembly – and performance.

On March 8th, 2017, Yokohama District Court ruled in favour of the suit brought by the anti-war protestors over the use of the pedestrian walkways in front of the station. Two days later, the city announced it would not appeal.