Jason is an artist and writer based in Singapore and New York. His art practice is concerned with the hollowing out of singular authority in favour of multiple perspectives and polyphony. »more

Given the history of its governance up to this present moment, authoritarian control has evolved from Singapore’s agonized past to its manifest destiny. The consequences of power and the foreclosure of opportunities and spaces for freer embodied expressions shape cultural productions and its receptions. At the same time, questions about the difficulties and complexities of artmaking become the signal moment in every other engagement by artists from Singapore with their audiences abroad. Artists are transformed from makers and creators into country representatives called to account for the spectre haunting the island, the spectre of censorship.

While the questions are understandable, even inevitable, the dominant influence of state power seems to produce only binary expectations of possible responses; they are either collaborationist or oppositional, either a socially or politically-oriented artistic practice or an art that submits itself to visual or dramatic pleasure. As though the preponderous agenda-set by the state limits the artists’ and audiences’ imagination on how artists can address, or embody the impact of the political power for and on those who inhabit this place. 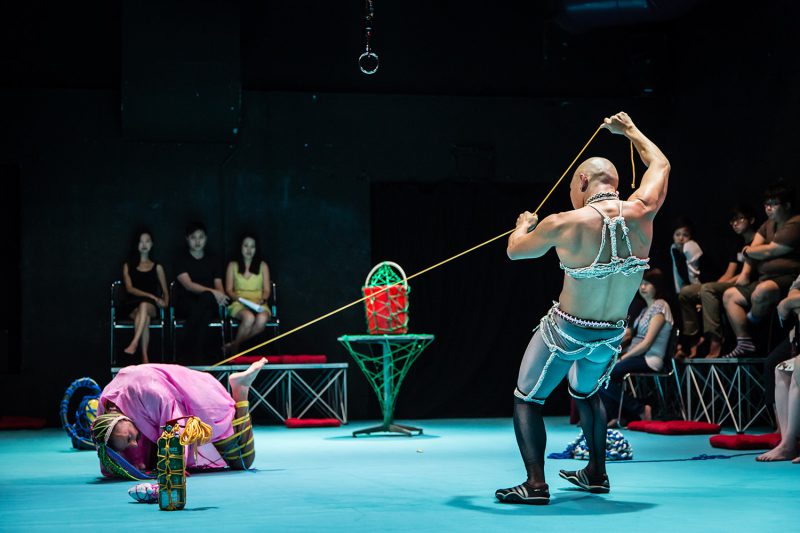 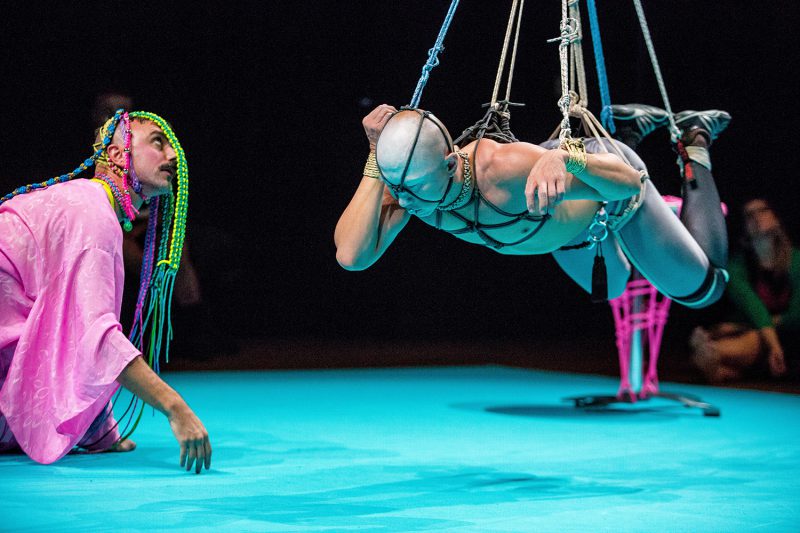 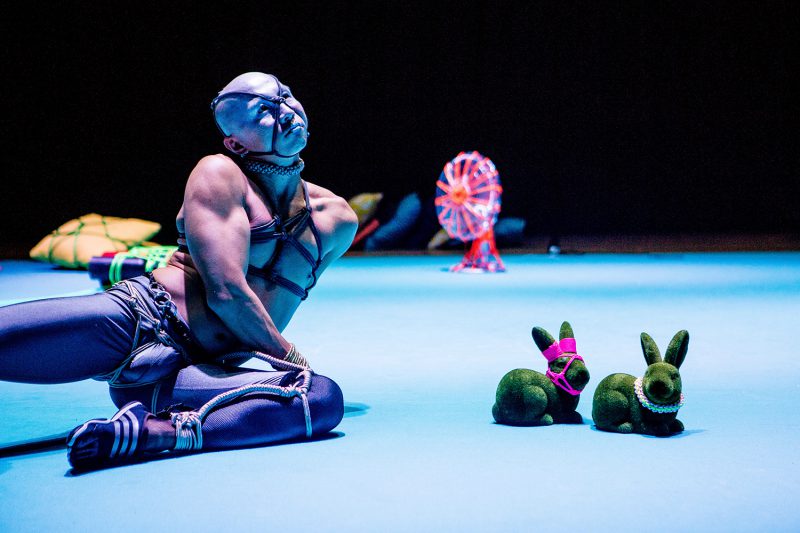 The dancer and choreographer Daniel Kok, in close collaboration with the Australian artist Luke George, spent time together in Japan and separately afterwards, learning the art of shibari, or Japanese-style tight binding. To this central repertoire of erotic bondage, they added nautical styles of rope knotting and macrame weaves, among other rope manipulation techniques to create a two-hour long bondage-installation involving the binding of objects, their own bodies as well as the audiences’. The production was first developed in Beppu Project Japan, previewed at the Substation and premiered at Campbelltown Arts Center, all 2015, before embarking on an ambitous tour in 2016 that saw performances in TFAM Yokohama, Abrons Art Center New York, and OzAsia Festival Adelaide.

The physical installation has evolved through these productions, but the initial scene the audience encounters remain the same; everyday objects such as a mop and portable stereo, tied up in colorful rope, strewn around the central performance area; Daniel Kok, in tights and gym shoes, bound and hoisted into the air; Luke George, more flamboyantly attired, eventually tied up and largely immobile on the floor. Whenever the spinnig Kok slows, the audience is invited by George to spin him in the air again and, after a time of languorous midair pirouttes, an audience member is invited to slowly release him.

The dyadic interaction between rope master and the bound ‘bunny’ represents a constantly-shifting state of power: who controls and who is manipulated, oscillating between the performers and the audience, and among the audience members. As the performance progresses, the audience are invited to do more, to lash Kok with a knotted whip, to tied George up and to release him, to permit themselves to be tied up by George, and also to take the reins of those individuals already bound and to lead them. Power as materially handled by Kok and George is simultaneously eroticized by violent force and surrender, and de-eroticized by clumsiness and camp, the suppleness of these tensions depending on the confidence and skill of those welding it. Power is offered and acsquieced to by the performers, sometimes with real danger. When Kok is hoisted close to the ceiling rig, the work of bringing him to the ground is left in the hands of audience members instructed only to plant their feet and hold tight. The remaining seated audience feel real and vicarious danger; too much slack, and Kok plunges to the ground. 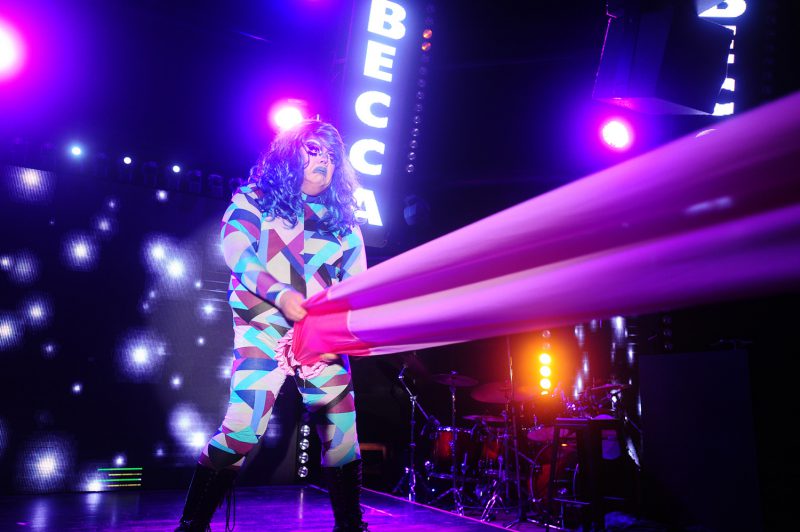 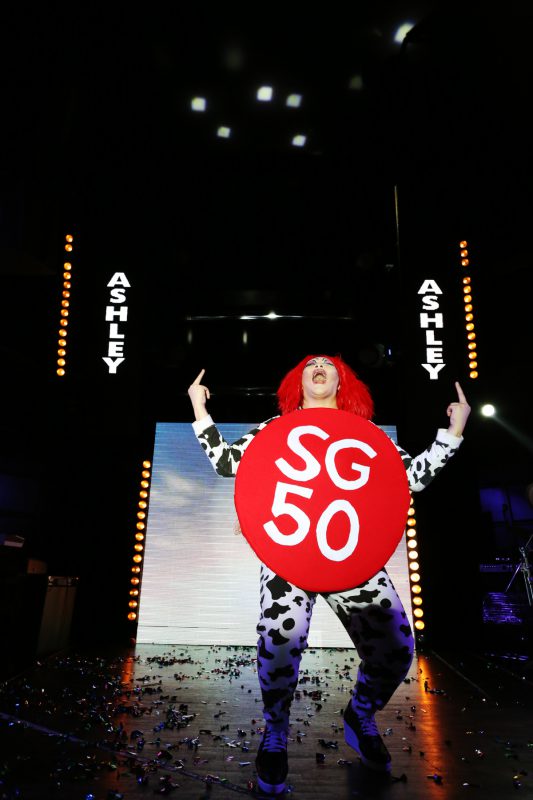 Becca D’Bus, the drag alter-ego of Eugene Tan, returned to Singapore from her birth and adolescence in Boston as a solo act, but in 2015 began a series of drag revues that have seen the House of D’Bus expand to twenty performers, including for the first time a drag king. RIOT is also an act of revivified queer history; opening for the first time in the year marking the 10th year since the popular comedy drag club Boom Boom Room shuttered. An undeniably magnetic presence when appearing in the productions of other directors such as Ong Keng Sen or Jerome Bel, Becca here is the ringmaster of a circus of uproarious chaos, the maestro of a lipsyncing choir, the wittily dry ham in a feast of rude dishes.

While the theatre company Wild Rice continually produces hilarious annual pantomines skewering the latest contrivances of the ruling oligarchs, the lo-fi production values and low-brow aesthetic of RIOT’s song-and-dance strike a uniquely subversive note in a passionately elitist city. Costumes are lovingly handmade, emphasizing the wierdness of gender presentations than the conformative norms of any one gender. It is not uncommon for costumes to split, pop their buttons, fall apart, yet the performers and audience gamely accept these malfunctions as incipient to the fun and meaning of drag itself.

Drag in RIOT becomes serial episodes of various performance failures in a city obssessed with success-by-‘performance reviews’ and successful censorship, staging their failures at social and sexual conformity, and their failures at ‘civil’ discourse and polite politics. Departing from the predictable female impersonation and mockery of celebrity foibles, RIOT is sharpest when its satirical and parodic elements come to the fore. Recent editions feature a character named Ashley Fifty, a parody of the S.G.50 celebration of patriotism and local pride that proliferated in Singapore during its fiftieth anniversary and beyond. Created with the playwright Joel Tan, Ashley Fifty is a melancholic walking red-and-white mascot trapped in a loveless relationship, expendable after completing its tour of duty. She inappropriately appropriated Joseph Schooling, Singapore’s young Olympic sports star, as her latest object of greasy affection, in the same fashion that politicians have swiftly appropriated him.

Nothing has consumed newspaper column inches and political oxygen more than the optics of queer visibility. Singapore, like India but unlike Hong Kong, continues to maintain the vestiges of colonial-era laws prohibiting same-sex acts ‘against the order of nature’, while insisting its citizens are sufficiently tolerated, evinced through the growing visibility of LGBTs across industries and institutional hierarchies. The India Supreme Court review of their unnatural acts law, as well as Taiwan’s consideration of a same-sex marriage bill, has ignited an urgent desire for greater social acceptance at home. While gay and lesbian bodies have frequently found sympathetic space on theatre’s stages, Pink Dot is the largest independent non-governmental, non-partisan public assembly in Singapore in nearly two decades. The optics of PinkDot is a Hydra of many clever heads, each with its own ways of seeing. It is on one hand what it claims to be, a public picnic with an accompanying concert in celebration of love and family of all stripes. It could justifiably be called a participatory theatre installation, as the evening culminates in the assembly gathering to form a singing, twinkling pink dot. It is also flash mob filmmaking leveraging the viral strengths of social media, where the evening’s happy mob is transformed through the work of an ambitious film crew and film editors into video shorts that amplify the message of acceptance, strength, visibility onto news feeds and websites. The assembled numbers continue to grow – nearly 30,000 at the last edition – as does the organized opposition to it. PinkDot continues to emphasize that it is non-political, especially in the sense that Singapore leaders have defined it (“do this in the political arena”). Perhaps here lies its responsive power.